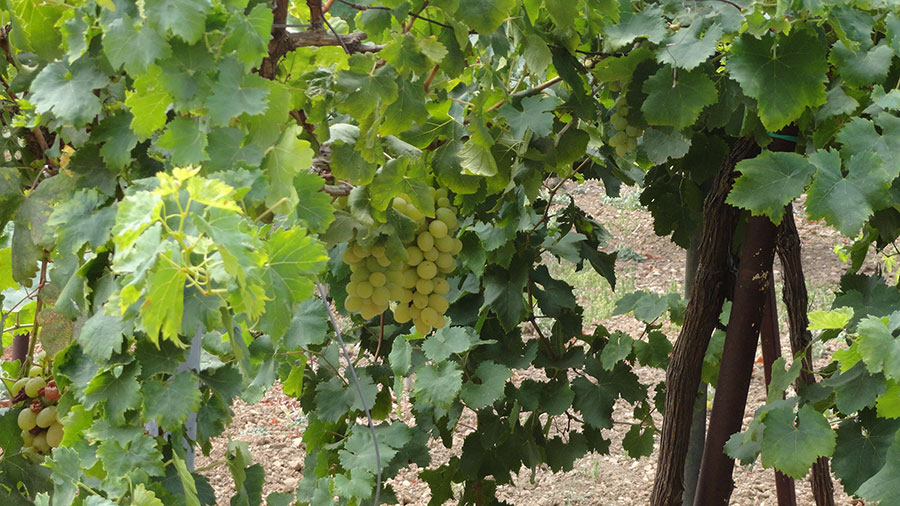 Did you know that Crete is one of the ancient wine producers of this world? Remnants of grape seeds have been found in vessels dating back to the Early Bronze age.

Wine constitutes along with meat, bread the fundamental part of the very well known food trilogy of the Homeric banquets and meals. Crete lies beyond the wine dark sea… Homer wrote.

From vine-cultivators to ​vintagers, grape traders the links in the chain of the Minoan and Aegean wine production. Grapes have been utilized in Crete by 5000 B.C. according to Archeological finds.

Today the only wine in the world known to contain Resin is the Greek wine retsina, also found in Crete. Light yellow variety or red. The resin of the native pines is added today in the beginning of the fermentation, just like it was done thousands of years ago.

The ancient mixed wine with water not only raisin, something practiced in the ancient peoples of the Mediterranean.

Athenaeus in Deipnosophistae suggests that the ancients put water in their mixing bowl first, Akratos meaning not mixed wine and pure Nile water.

But wine was also used to wash the wounds of Homeric heroes and warriors as an antiseptic .Dionysus Zagreos found on linear B tablets at the palace of Nestor at Pylos,was also known as Hygiatis he who gives health.

It seems the ancient understood that mixing wine with water had healing properties,we today know it kills bacteria such as E coli, Salmonella and Staphylococcus.

Cholera and typhoid bacteria are killed when exposed to dry red wine! But the most universally acclaimed and prized wine in Greek antiquity was the Pramnian,the cup of Nestor in the Iliad as well as the wine of Circe in the Odyssey given to the men of Ulysses.

This sweet wine from a grape cluster dried in the sun or having been scorched and bruised on the vine branches is the Kritikos wine (the Cretan wine or Pramnian).

The wine of Crete was enjoyed by the ancient Egyptians,ancient Greeks, Romans, European Christians and even the Muslim Ottomans!

Wine centers from antiquity still in use today are to the south of Knossos Archanes, Peza, Malevizi, Mesara, Casteli, Amari and Lousakies etc.

The Cretan wine is a pedigree, Crete is the most important vinicultural district of Greece.

In 1976 phylloxera damaged a large part of the viniculture of Crete.

The island has many vinicultural cooperatives, you can taste here local ancient varieties as well as French that sometimes as we say can also marry a Cretan variety .

You see for us wine slips through our lips and reaches our soul, just like Dionysus in ancient times, just like Holly communion today, for we say in Crete after sharing a glass of wine with someone we forge a promise of hospitality and friendship!

Let us guide you to the Wines of Crete!

WeGuide you to wineries, taste experience, see enjoy the Wines of Crete!
Taste the wine of Crete, taste Dionysus, taste the wine that was enjoyed by Egyptian Pharaohs,Homeric Gods and heroes, Roman generals, Christians of East and West the wine that allured Ottomans …the wine that either remained Minoan or bedded the French vines.

For this island a continent has a long tale to say and good wine is needed always when a good long story is told.

For Crete has many stories and as many vine and grape varieties for you to enjoy.

WeGuide takes you to the Wines of King Minos, the Wine enjoyed by Ramses, the Wine of Homer, the Wine of Biblical times, the wine of Tiberius, the Malmsey wine, the Marouvas wine…the Cretan Vines. Weguide you through the wine routs of Crete you will have the opportunity to taste the history of the Eastern Mediterranean up to present day.

For this sacred spirit, the wine of Crete is the light, the sun the earth bottled and enjoyed…